Terrible Tudors is a book by Terry Deary published in 1993 and is the first Horrible Histories book published (Along with Awesome Egyptians). 5 years later, another book called 'Even More Terrible Tudors', later called 'Terrifying Tudors', was released containing additional history of the Tudor dynasty.

Every one knows that the Tudors were a family that ruled England from 1485 to 1603 but what you dont know is that the Tudors were a murderous and ravenous bunch. From Henry VII defeating Richard III at the Battle of Bosworth to his horrible son Henry VIII who is known for his six wives. Then discover the foul facts about his three children Edward VI, Mary I and Elizabeth I plus learn what its like to live in the Terrible Tudor Times.

So if you want blood, gore and foul facts aplenty you must read Terrible Tudors! 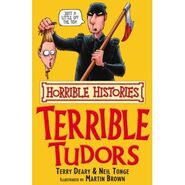 First edition of Terrible Tudors and Slimy Stuarts Two In One.

2007 Horrible Histories Two In One Makeover Edition with Terrible Tudors.

Community content is available under CC-BY-SA unless otherwise noted.
Advertisement