Simon Farnaby (Born 2 April 1973) Is an English actor, comedian and writer, probably best known for his work on The Mighty Boosh and his multiple roles in the CBBC historical sketch show Horrible Histories. Alongside his fellow co-stars, Farnaby has also written and starred in a number of other TV series and feature films.

Farnaby was born in Darlington, a large market town in County Durham, England on 2 April 1973. He attended Richmond School in North Yorkshire before going on to graduate from the Webber Douglas Academy. He is also a former member of the National Youth Theatre.

After leaving education, Farnaby had a brief role in Coronation Street. He was a long-time member of the BBC Three comedy series, The Mighty Boosh supporting cast between 2004 and 2007. He also appeared in its spin off Bunny and the Bull.

In 2009 Farnaby was cast in the CBBC comedy sketch show Horrible Histories. He played multiple roles during the shows five series run including Death, Caligula and George III of Great Britian.

While working on Horrible Histories, Farnaby and his co-stars became considerably close, both personally and professionally which lead to the group working together once Horrible Histories ceased fulltime production. The first project was Yonderland, a fantasy sitcom which ran for three series and a Christmas special between 2013 and 2015. In 2015 the group wrote and starred in their first feature film, Bill[1] a fictionalized account of William Shakespeare's early life. 2019 saw the team reunited when they co-wrote, produced and starred in a comedy-horror for the BBC entitled Ghosts. This series proved to be highly popular with critics and audiences alike, so successful in fact that as soon as series one finished airing, it was announced that the BBC had ordered another two series. Series two will air sometime in 2020. 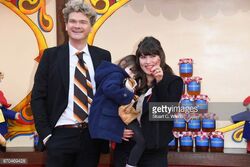 Farnaby is married to fellow actress Claire Keelan with whom he has one daughter, Eve, born in 2014[2].[3]

Farnaby is a huge golfing fan. Along with journalist Scott Murray, he co-wrote The Phantom of the Open, a biography of Maurice Flitcroft, a would-be professional golfer whose unsuccessful attempts to qualify for the Open Championship led to him being described as "the world's worst golfer". The book was published in 2010.[4]

Retrieved from "https://horrible-histories.fandom.com/wiki/Simon_Farnaby?oldid=10641"
Community content is available under CC-BY-SA unless otherwise noted.