Start a Wiki
Awful Egyptians is a book by Terry Deary published in 2006. It is based on the Ancient Egyptians.

In 2008, Awful Egyptians was republished with a new look and new content along with the other books in the original series. It is going to have a 20th anniversary edition revised for younger readers in 2013

The title page has the following dedication;

In fond memory of Rosemary Bromley, 1922-2005, without whom Horrible Histories would not have been written. TD

Think you would have liked being an Ancient Egyptian? Not after you’ve read this book! Discover the disgusting details of their groovy gods, their potty pyramids and (of course!) their mad mummies. Find out how a hunted hippo got his own back on a foul pharaoh! Discover the truth about cool queen Cleo and the curse of Tutankhaumun! There’s also a Top Ten of funny pharaohs, a Mad Mummies quiz and lots of foul facts about the messy mistakes the Egyptians made before becoming mummy-making experts. History has never been so horrible!

the original cover for Awful Egyptians. 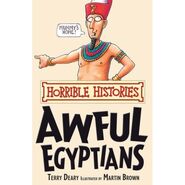 Another cover of Awful Egyptians. 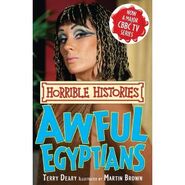 The TV-tie in cover for Awful Egyptians 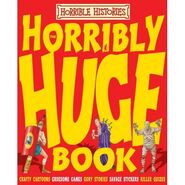 Retrieved from "https://horrible-histories.fandom.com/wiki/Awful_Egyptians_(book)?oldid=10759"
Community content is available under CC-BY-SA unless otherwise noted.